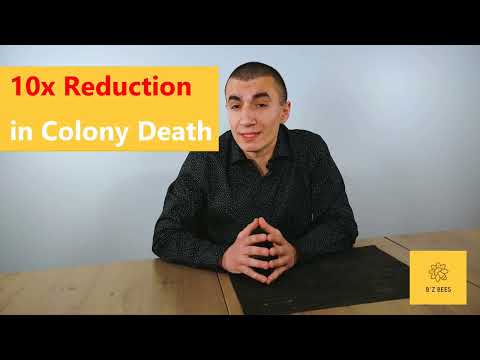 At B'z Bees we have crafted the perfect beekeeping starter kit. Our reinforced polystyrene foam boxes have an R-value of 7 vs wood boxes 1. Meaning it insulates the bees 7x better than wood. Our bottom board design is only available at B'z Bees, once installed, there is no need for an entrance reducer, or anything else used to fight wasps, mice, other beehives and most importantly the cold. The kit includes a 5 frame nucleus colony with a healthy queen and bee population breed in Kamloops BC. Queens are bred by renowned beekeeper Micheal Palmer in Vermont. Unlike other beekeeping kits that leave you to figure everything out on your own, we can help you with the three most challenging parts of owning bees. We will (1) deliver the bees and kit to your house. If you wish, (2) we can install the bees in the hive and guide you throughout the season. And during harvest season (3) we’ll come and extract honey from your hive and put them into jars, well we even buy the excess honey from you! We ask you to join a community of thousands having a positive impact on their environment. While learning about nature, getting exercise outdoors, and in the end, you get a bounty of honey! We believe it is a win-win for everyone! We ask you to become a better beekeeper, the bees need us! Support B'z Bees to get involved now

When I was 7 years old, I got too close to a beehive and got stung multiple times on my head. I was fine but the pain was unbearable. Since then, I have been afraid of bees.

I remember one spring, a bee landed on my grandmas' white hair. I yelled out “there is a bee on your head, should I kill it?” She gave me a disturbing look. My grandma explained the bees will not harm me if I do not harm them. She said if I ignore the bee, it will fly away. Right as she finished her sentence the bee flew away.

I despised honey as well. When I would get sick, my mom would try to sneak in honey into my tea, but I would refuse to drink it. I could not be tricked; I could smell the honey in the tea.

When I would get the flu, my mom would smear honey on my back and wrap it like a mummy with cloth. Afterwards I would have to wear a steel wool shirt my grandma hand knit for me. All I can remember is for the first hour of bedtime it was a sticky itchy mess.

As my appetite grew, I developed a taste for honey. I would pour the jar straight into my mouth when I would get home, in the morning times, late nights, whenever!  I fell in love with honey.

Then I started to learn about its magical properties. Honey cannot expire, it kills bacteria, rich in antioxidants and other nutrients. Better substitute for diabetics, improves heart health, promotes healing, helps suppress cough, and most importantly it’s delicious!

Now I love honey so much I became a beekeeper!

On a chilly day in October 2019 Calgary Alberta. I receive a phone call from Cole Stefan (a friend I met at Lethbridge College). Cole tells me about an exciting business opportunity regarding bees. We meet for coffee, and he gives me a 200-page report detailing beekeeping in Alberta.

I went home and did not read the report for two weeks. Eventually, after being pestered by Cole, I read the report. The first statistic on page 1 was “Alberta is the beekeeping capital of Canada” 40% of all honey processed in Canada happens in Alberta. After reading more couple pages I realized there is a huge business opportunity here.

I explained to Cole that I know nothing about bees but am eager to learn. Cole explained to me his in the same situation and his grandpa has some experience with bees down in foremost Alberta. We decided to start with 50 bee colonies and eventually work our way up. We made an order of 50 bees in January 2020 and gave a $6000 deposit to our bee breeder.

The next step was to purchase the boxes for the bees. We looked at equipment in China that was a reasonable price and good Quality. by the time we figured all this out it was March 2020. COVID hit and we were not able to get any products in from China. We decided to purchase local, but our costs had tripled. We no longer could afford to house 50 bee colonies but had made the deposit and our bee breeder was only able to reduce the order to 42 bee colonies.

We panicked and started to scramble. I contacted local beekeepers that were not able to get their bees in from New Zealand due to COVID. Beekeepers explained to me they were looking for bees and coincidently we had more bees than we needed. In the end, we were able to sell 16 bee colonies to local beekeepers in Calgary and we were left with 24.

We bought equipment for 24 colonies and went down to Foremost Alberta to Coles grandpa canola farm (4000 acres). I got a chance to speak to Cole's grandpa by himself and I asked him if he ever did beekeeping. Cole's grandpa replied “yes, I got some bees a while back and found out I was allergic. I got to rid of them the next day.” I was not angry, but I felt a little deceived by Cole. But it was happy deception, it all worked out in the end.

Internally I was freaking out. I realized both of us know nothing about beekeeping. And we have nobody we could ask for help.

I joined a bunch of beekeeping groups in Calgary and took a two-day beekeeping course. After the course, I felt more confident, but I still had no idea about beekeeping.

May comes and it is time to pick up the bees. We get and put our bees into their boxes and the first week we had 3 die due to a windstorm that tipped the boxes.

There were 21 colonies going into 2021. The First 2021 check happened in March, and we found 11 dead. We were devastated and almost gave up. The stench of dead bees was horrible, it felt like a war zone. They died to bunch of reasons related to inexperience.  Every single reason could have been addressed and fixed.

When all of this was happeing(March, 2021)  I was working in BC, and we decided to move them there for the better climate and early spring. I took the 10 hives to BC Okanagan area and grew them into 18 colonies.

First winter check happened in January 2022, and we found 1 dead out 18. Our first-year death rate was 55% and this year it was 5%. The avg death rate in North America during winter for beekeepers is 20-35%. These numbers are not good, and I was above them in the first year. It is goal for all beekeepers to have less than 5 % death rate. And I was able to achieve this number by listening to my mentors and learning from my failures.

That is where B’z Bees comes in. I do not want to see bees die due to human error. Death is natural and it is going to happen. But we can help minimize it. I want to give to back to Mother Earth by teaching others what I have learned and sharing lessons from my mistakes. I want people to know that bees are dying but not because of nature but because of human error. And that is all it is error, it can be corrected, fixed, Realigned, reimagined into something better!  and something better is B’z Bees.

How do bees survive in Canadian WINTERS?

Bees can live up to -40 celsius! As they keep the hive dry and the queen warm the cold cannot deter them!

What do bees do in the winter?