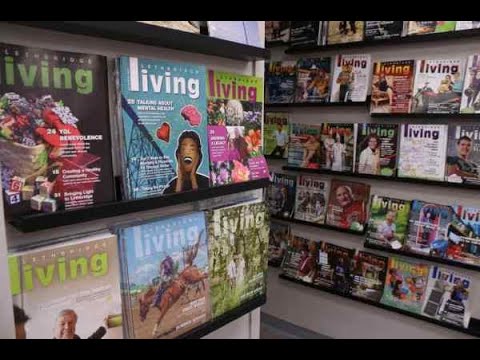 I am working very hard to include a greater diversity of voices on the pages of the magazine. It has been a challenge in more ways than I had anticipated.  I took over as Publisher in 2017 and I promised advertisers that it would be business as usual for at least the first year as Publisher. It has been business as usual for two years and I have learned that print needs to be supported by other revenue streams.

I am steadfast in my resolve to make this a new era for Lethbridge Living.  It's a costly undertaking that I am honoured to face. I know that in order to succeed I need to stay focused on what I know and love. I know and love film and fundraising for culture so in this new era at Lethbridge Living. Those who know me well will attest, I'm pretty open and really positive and cheerful about what any day brings.

I am optimistic about the many bright and financially viable future of Lethbridge Living.

Having support like yours is all-important. It will be a game-changer.

Let's put stories on at the centre.

-- Thanks for your support!

I was born and adopted and raised in Ottawa. I began my career working for the National Film Board of Canada in my early 20s in the mid-1990s, I was a national marketing manager. It was my job to sell VHS of documentaries. I loved it. I left that very secure and well-paid job because the life my interest in being an entrepreneur found me. I made my first independent short film in 1999. It made a splash, back in the day (I am delighted that on its 20th anniversary it's being rediscovered by a new generation and it's getting me back on the film festival circuit this year) and to pay the bills I continued freelance marketing in the film industry in Montreal, Toronto and New York with Miramax and later the Weinstein company. I did freelance PR for TIFF and Hot Docs. I moved to Lethbridge from Montreal with my partner who is an artist and prof at the U of L. It has been an eye-opening 14 years. Upon our arrival in 2005 I made a film with the NFB and CBC that won a few awards. https://www.imdb.com/title/tt1147703/ https://www.nfb.ca/film/24_days_in_brooks/ . I then was a prof at the U of L teaching film production. I enjoy doing more than teaching. The creative economy in Lethbridge does not really support filmmaking in a way that pays artists to build careers solely in film so I re-envision my own career to tell stories as part of fund development campaigns which I had done for film festivals. I was recruited by the Calgary Stampede to craft the story that was the basis for raised $100M+ then I did the same for Lethbridge College. Making the mid-life leap to print media from film has been an adventure. I'm so honoured to publich Lethbridge Living - and I feel I'm just getting started. I hope you'll come along!
Read More

This year we launch into a brand new era at Lethbridge Living.

Where can I find financial information about Lethbridge Living?

Is it safe to give online?

Will I get a tax receipt for this contribution?

No. But anyone can support the Lethbridge Living Endowment Fund managed by the Community Foundation. Donors to the Endowment Fund WILL receive a charitable tax receipt.
Comments
List of supporters