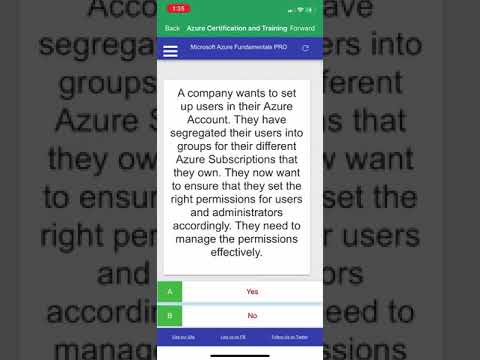 I am building two cloud education apps to help people learn about the cloud (AWS, Azure, GCP) from their mobile device, prepare for cloud exam certification and get a boost in their career and job prospects.

COVID-19 has forever changed the way we work and learn.

The only constant during a pandemic is that people are glued to their mobile device. Unfortunately, that habit is not going to change even after COVID. Instead of fighting the reality, the best approach is to adapt.

Technology is changing and is moving towards the cloud. The cloud will power most businesses in the coming years and is not taught in schools. How do we ensure that our kids and youth and ourselves are best prepared for this challenge?

Building mobile educational apps that work on any device can help greatly in that sense.

The ability to tab on a button and learn the cloud fundamentals and take quizzes is a great opprotunity to help our children and youth to boost their job prospects and be more productive at work.

I made it a mission to solve that problem.

As of today, Most Cloud Education and Certification quizzes are not available on Mobile. You must log into a computer to attempt a Quiz or take lessons.

My Apps are solving that problem: With my platform independent Cloud Educational Apps, you are able to learn about the cloud, take quizzes and mock exams directly from your mobile phone anywhere and anytime.

This is a preview of the Cloud Practitioner Practice Exam App: https://youtu.be/-Dq5sFQUOy4

I need your help to take Djamgatech  to the next level.

I am Etienne Noumen, Afro-Canadian, Professional Engineer affiliated with APEGA.

I studied Software Engineering at Laval University in Quebec, and moved to Alberta in 2005.

I live in Calgary with my beautiful wife and 4 children.

I work as a Software Engineer and I build innovative technological solutions for education via my company Djamgatech Corp.

I am a high energy individual and I am constantly  juggling between my full time job,  coaching my kids soccer and Basketball teams all year long, and building innovative technological solutions for education.

I am huge soccer fan, player and coach.

I am all about hard work, passion, high energy, creativity, commitment, efficiency, respect and protection of the environment.

I enjoy automating useful tasks for corporations and people using IT tools and concepts. I take pride in designing, creating useful and valuable apps from scratch.

Take a look at my blog at https://enoumen.com

How it all started?

I am a big soccer fan and I like to play soccer for fun.

In 2009, I was looking for a place to play consistently in Calgary and i was told that i needed to be in a league to play.

I wanted to be able to play whenever i wanted without being necessarily  part of a team. It wasn't possible. I decided to fix it by creating a league called ShowUpandPlaySoccer with the main idea being to help people play pick up games.

It was a big success and I was running pick up games all over Calgary.

Then i thought why not doing this in other cities? I decided to build a mobile app called Djamga to help people find pick up games to play. I didn't have any experience bulding mobile apps, and I didn't have any money to hire developers to get it done. I learn to build iOS and android and windows 10 apps and built Djamga using Pwa technology.

That's how  i started my journey of building mobile apps.

In recent years, my company decided to move to the cloud and I realized that the cloud is the future of Business IT infrastructure.

My mobile application knowledge developped over the year applied to the cloud was my Aha moment.

I decided to focus on educating people about the cloud via mobile apps.

Thats how my idea came up.

How many apps do you plan to build?

I have already built four. I plan to build two more cloud educational apps before the end of 2021:

Can I get promo code to download the app if I contribute?

You will be provided a promo code applicable to your device (iOS, Android or Google).

The PROMO CODE to download the App will be sent to you 1 day after receiving your contribution.

The Phone Ring and the stickers will be shipped to you 2 days after receiving your contribution.